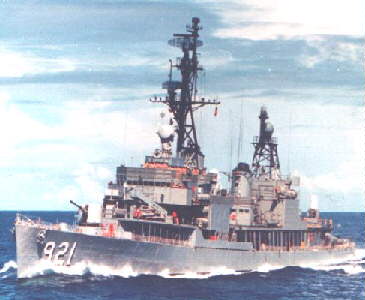 The Hanson, as the Liao Yang, was converted to an area air defense ship under the Wu Chin III program. This upgrade involved the installation of the H930 Modular Combat System (MCS) with a Signal DA08 air search radar (employing a lightweight DA05 antenna) and a Signal STIR missile control radar directing 10 box launched Standard SM-1 surface-to-air missiles (two twin in "B" position, two triple facing either beam aft). The system can track 24 targets simultaneously and attack four with an 8 second response time.

The ship is also fitted with an OTO Melara 76mm, two Bofors 40mm/70, and a Mk 15 Block 1 Phalanx CIWS. The amidships ASROC launcher was retained and integrated with the H 930 MCS. The SQS-23 sonar has been upgraded to the H standard using a Raytheon solid-state transmitter. In 1994 the Ta Chen datalink was installed.

Commissioned in 1945 by the United States Navy as the USS Hanson DD-832, this grand old Ship served the cause of Freedom for 28 years flying the Stars and Stripes. Less than a month after her decommissioning the Hanson 832 began a second career with the Taiwan Navy where she proudly flew the Red, White and Blue for another 31 years, under the Taiwan flag. When Bath Iron built this old girl they did it right. It wouldn't be surprising for that to be a record unsurpassed - 59 years of excellent service! On 1 June, 2004 Taiwan decommissioned her for the last time. One feels an ambivalence here. Proud, yet sad. This Ship deserves to be preserved as a museum somewhere in this country. One shudders at the thought of shaving with that weary warrior.

Shipmates, it' s on a sad note that I report to you the end of the career of a great Freedom Fighter, the USS HANSON DD/DDR 832, our home away from home many years ago. Launched in 1945, the HANSON saw 28 years of service in our U.S. Navy until 1973 when it was decommissioned and transferred to the Republic of China/Taiwan (ROC/TW) and designated the LIAO-YANG DD 21, later designated the DDG 921. After 31 years of service in the ROC/TW Navy it was decommissioned in 2004. In July 2006 the ROC/TW conducted a national joint armed forces Han-Kuang Exercise. The HANSON participated as a target ship and was sent to the bottom in the South China Sea, resting as an "artificial reef".

Contrary to how we may feel, it was not a bad ending for a tired warrior. It had survived 4 wars, counting the Cold War, WWII, Korea, and Viet Nam. And although scarred and wounded it never succumbed to hostile action. It went down training a new generation of Freedom Fighters.

I became interested in learning the status of the Hanson after reading some e-mail chatter from our HANSON Reunion Association of the possibility of making a donation to a Gearing Class Destroyer or to the Tin Can Sailors (TCS) organization for further distribution, provided it received approval at our forthcoming reunion.

Navy reference publications revealed that there were 36 Gearing Class Destroyers built in the DD/DDR configuration for WWII service. 8 of them were in our original LANTFLT DESRON 14, 4 in our Division 142; the LARSON 830, GOODRICH 831, HANSON 832, and THOMAS 833. It was confirmed that there were no reserve fleet or museum DD/DDRs in being. It occurred to me that it may be appropriate to make the donation to the LIAO-YANG depending on the status of the ship. I contacted my classmate, VADM Earl Fowler USN , retired Commander Sea Systems Command, who had had a network of colleagues connected with the ROC/TW Navy while holding that position. Through the network, I was able to make contact with a retired ROC Naval Officer, Kevin Peng, who coincidentally had his first tour of sea duty aboard the ex-Hanson in 1989 as a LTJG. It was thru him that I was advised of the fate of the ex-Hanson, our friends Liao-Yang.

As a note of further interest, I am informed by TCS that the last active service GEARING Class steam powered Destroyer in the world is the ex-USS STEINAKER DD/DDR 863. It was commissioned in May 1945, not converted to the DDR configuration until 1952. In 1982 it was decommissioned and transferred to the Mexican Navy, renamed the ARM NETZAHUALCOYOTL (or "NETZA") D102.